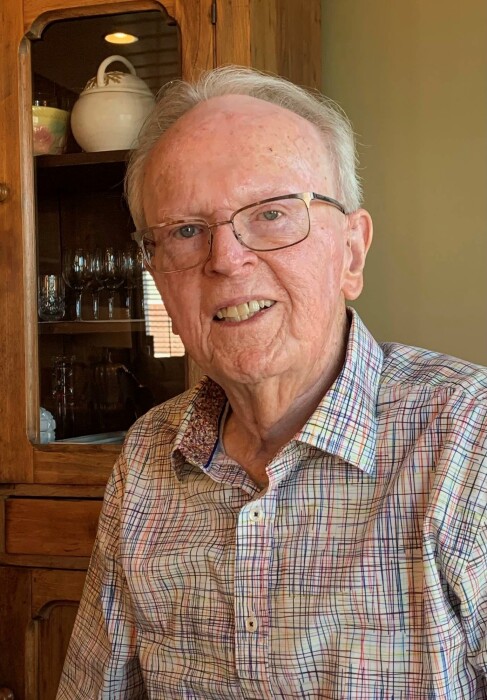 On Sunday, January 9, 2022, Dale Strubbe of Spring Hill, Tennessee, loving husband, father, and grandfather passed away at the age of 81.

Dale was born in Jacksonville, Illinois to Herbert and Mary Rachel (Thompson) Strubbe. He married the love of his life Carol (Stockhecke) on October 13, 1962 after meeting on Valentine’s Day that same year. Together they raised three daughters: Susan, Holly, and Jill.

Growing up he developed his strong work ethic while multitasking on his family’s farm in Arenzville, Illinois. Dale also competed in 4-H, wore 66 on his football jersey for Triopia Senior High (where he always practiced a drill at least one more time than the coach asked of him). He was vice president of his senior class. He was also in the Queen’s court and sang in the high school quartet. He loved cool cars and adored his ‘57 Chevy that he nicknamed the “Cradle of Love!”

He attended business school at Gem City College in Quincy, Illinois. Dale started working at CB&Q Railroad in Quincy, Illinois, as a stenographer. He rose up the ranks and became a salesman for several shipping companies and ended his career at BAX Global as the Global Account Director. His career required him and his family to relocate often as he worked in various cities across the United States: Chattanooga, New Orleans, Spokane, St. Paul, Pittsburgh, Detroit, Chicago, and Nashville.

His career also allowed him to be an adventurous world-traveler. He had the opportunity to visit Hong Kong, Singapore, Taiwan, Malaysia, France, Australia, Ireland, Scotland, England, Germany, South Africa, Belgium, the Netherlands and Mexico. Dale made sure to pick out thoughtful gifts along the way and shared entertaining stories from his travels with his family and friends. Dale spoke glowingly of all the people he met and the places he visited. He was a “people person” and was blessed to have a career where he was able to work with and meet so many amazing ones.

Dale retired in 2007 and was then able to seriously focus on playing golf along with gardening and landscaping. He would walk every morning before it became too hot in the summer. Dale loved entertaining out-of-town guests and he planned exciting outings such as listening to live music at the Grand Ole Opry, Tootsie’s on Broadway, or at the BlueBird Cafe, exploring Cheekwood Botanical Garden, and soaking in music history at the Johnny Cash Museum or Third Man Records. ‘Music City’ was a fitting place for Dale to live since it’s a city buzzing with talent and determination.

Dale was a beautiful singer. He often sang at church with his brothers while his mother accompanied them on the piano. He could often be found listening to Johnny Cash, Dolly Parton, George Jones, and many other talented musicians. He was an avid reader and movie-goer and enjoyed playing golf with his friends, wife, daughters, sons-in-law, and grandchildren. Even though the pandemic prevented Dale and Carol from being with their family for quite awhile, they all managed to come together to celebrate Dale’s 80th birthday in August 2020, enjoying a round of golf, great food, and one of his favorite desserts, Italian Cream Cake.

Dale was a mostly self-taught Renaissance Man, although his mother made sure that he knew how to properly clean and do laundry. She taught him to be helpful and he remained that way his whole life. If something needed to be painted, built, replaced, fixed, recalibrated, organized, or cleaned Dale was ready to take on the challenge. He was also an excellent candy cane cookie baker at Christmas and a popcorn ball creator at Halloween. Dale cultivated an immaculate yard with beautiful landscaping no matter what planting zone he and Carol lived in.

Dale loved his family and had a special bond with his brothers. You knew you were in the presence of the Strubbe boys if there was a loud ruckus of talking, singing, and frequent hoots of laughter. Lots of food was always being consumed, and a very competitive game of cards was most likely being played. Dale was the last of his brothers to pass and he is surely thrilled to be reunited with them now. He adored his daughters, sons-in-law, and grandchildren and would visit them often in Illinois and Iowa. He remained a traveling man his whole life.

Dale had a strong faith in God and was baptized at Salem Lutheran Church in Jacksonville, Illinois on August 31, 1940. He and Carol are members of St. Peter’s Episcopol Church in Columbia, Tennessee.They volunteered at an elementary school in Franklin, Tennessee and made deliveries for Meals on Wheels. He remained a season-ticket holder for his beloved Chicago Bears and cheered them on each week, win or lose.

Dale was preceded in death by his father Herbert and his mother Mary Rachel (Thompson), along with his brothers Harlan, Wayne, Keith, and Myron. He is survived by his wife Carol, his daughters and sons-in-law Susan and Richard Plese of Minooka, Illinois, Holly and Matthew Murer of Chicago, Illinois, and Jill Strubbe of Iowa City, Iowa, his grandchildren, Kylie (Tim) Janacek, Colin Plese, Cole Plese, Nolan Balmer, and Eleanora Murer, several nieces and nephews, sisters-in-law, cousins, an aunt and many, many friends.

A Memorial Service will be held at 11:00AM Tuesday, January 18, 2022 with visitation with the family at 10:00AM until service time at St. Peter's Episcopal Church in Columbia, Tennessee with Reverend Christopher Bowhay officiating.  A Celebration of Life Ceremony will be in Illinois in April of 2022.  More details to follow.

In lieu of flowers, the family asks that you donate in memory of Dale to the Crohn’s and Colitis Foundation of America: crohnscolitisfoundation.org/donate.  Or mail your donation to: Crohn's & Colitis Foundation National Headquarters, ATTN: Financial Operations, 733 Third Avenue, Ste. 510, New York, NY 10017.

To order memorial trees or send flowers to the family in memory of Dale Strubbe, please visit our flower store.